On the way to school

Innovative teaching strategies to promote a different learning have been rising in the past decades and open the doors to new paths to training. “New education” has an increasingly strong echo, it’s a school of thought based on the active participation of students in their own formation. When education places exploration and cooperation as a priority, video mapping appears as the perfect discipline.

During 3 years, HeavyM has realized the interest of schools and universities in the video mapping’s co-creation potential: it’s a prime (and playful) initiation to a collective expression, an appeal to imagination and logic. There are mainly 2 scenarios:

Some teachers directly buy the license and set a course up: In 2016, at Collège Puits de la Loire (Saint-Etienne), teachers of plastic arts and music education co-hosted a special class to prepare their pupils for EPI (Practical Interdisciplinary Teaching). They choose HeavyM because of its ease of use and ability to combine visual content and sound analysis tools. An ideal instrument to help students to imagine new devices, new processes and create interactive projects.
The results were very positive. All the teams, more motivated than usual, realized a project and made their first steps in the interaction between real space and video image.

These original courses designed with the HeavyM software occur in France of course, and all over the world: in the United States (Portland Community College, Alabama, Maine Universities), Japan (Chiba University of Commerce), India (Srishti Art Institute), Africa from the South (University of Cape Town) … To the most remote lands, beyond the Arctic Circle (University of Lapland)!

Other teachers call on the team to rely on their expertise. These requests come from all academic levels, from elementary schools to junior high schools and higher education schools. Etienne, Arnaud and Romain then become transmitters of interactive techniques in bespoke workshops.

Early 2015, as part of ARE (Educational Rhythm Management), Etienne animated 2 workshops during 4 afternoons at Guadeloupe Elementary School, Paris 18th, with the teacher’s assistance. In the first one, students made a drawing on an A4 sheet and constructed a pyramid of small cardboard cubes. Then, Etienne taught them to create a square shape in the software to outline the contours of the small cubes. Every child inserted their scanned drawing into the delimited square on the computer. The result amazed them: a real wall of animated images! 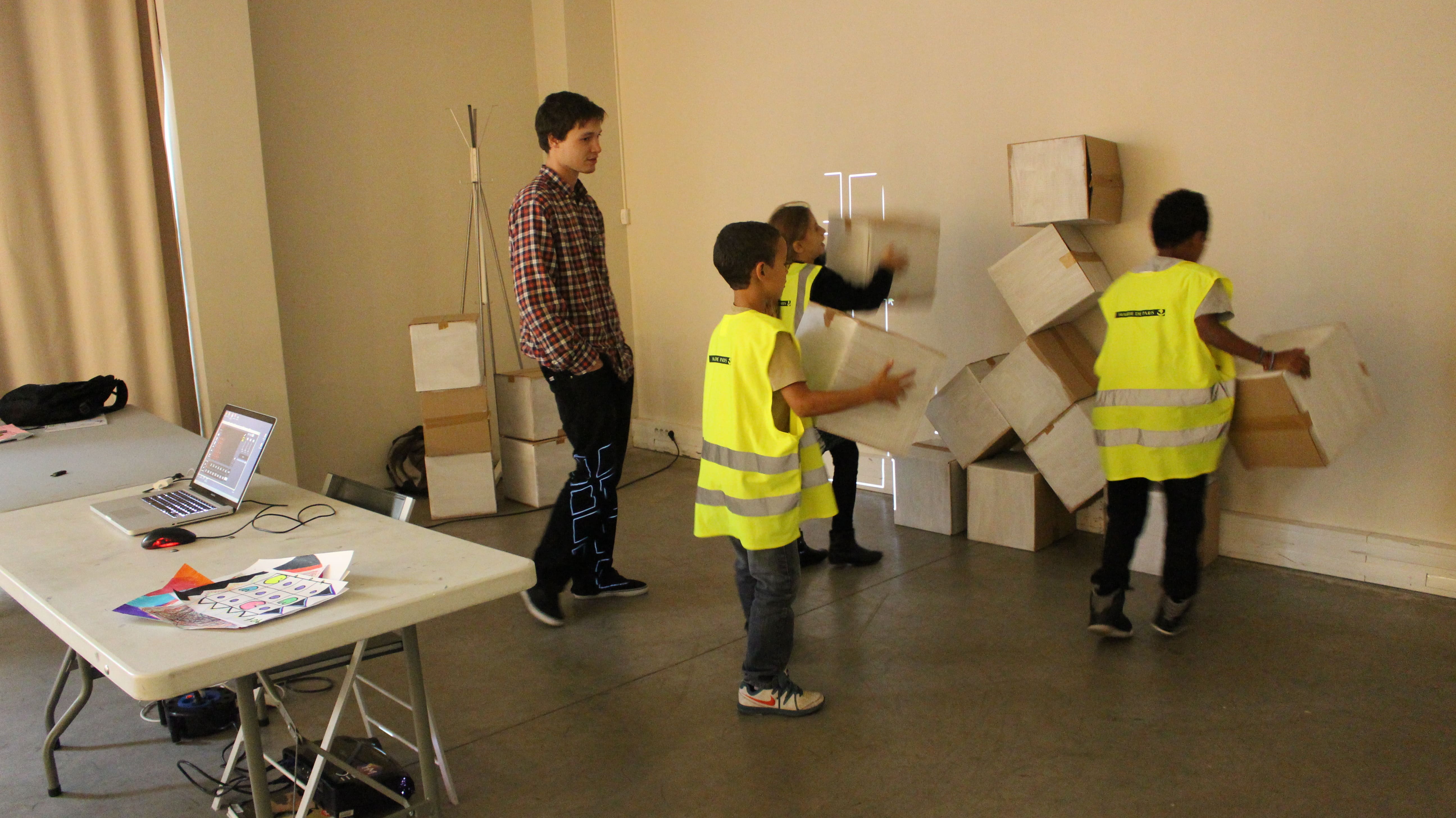 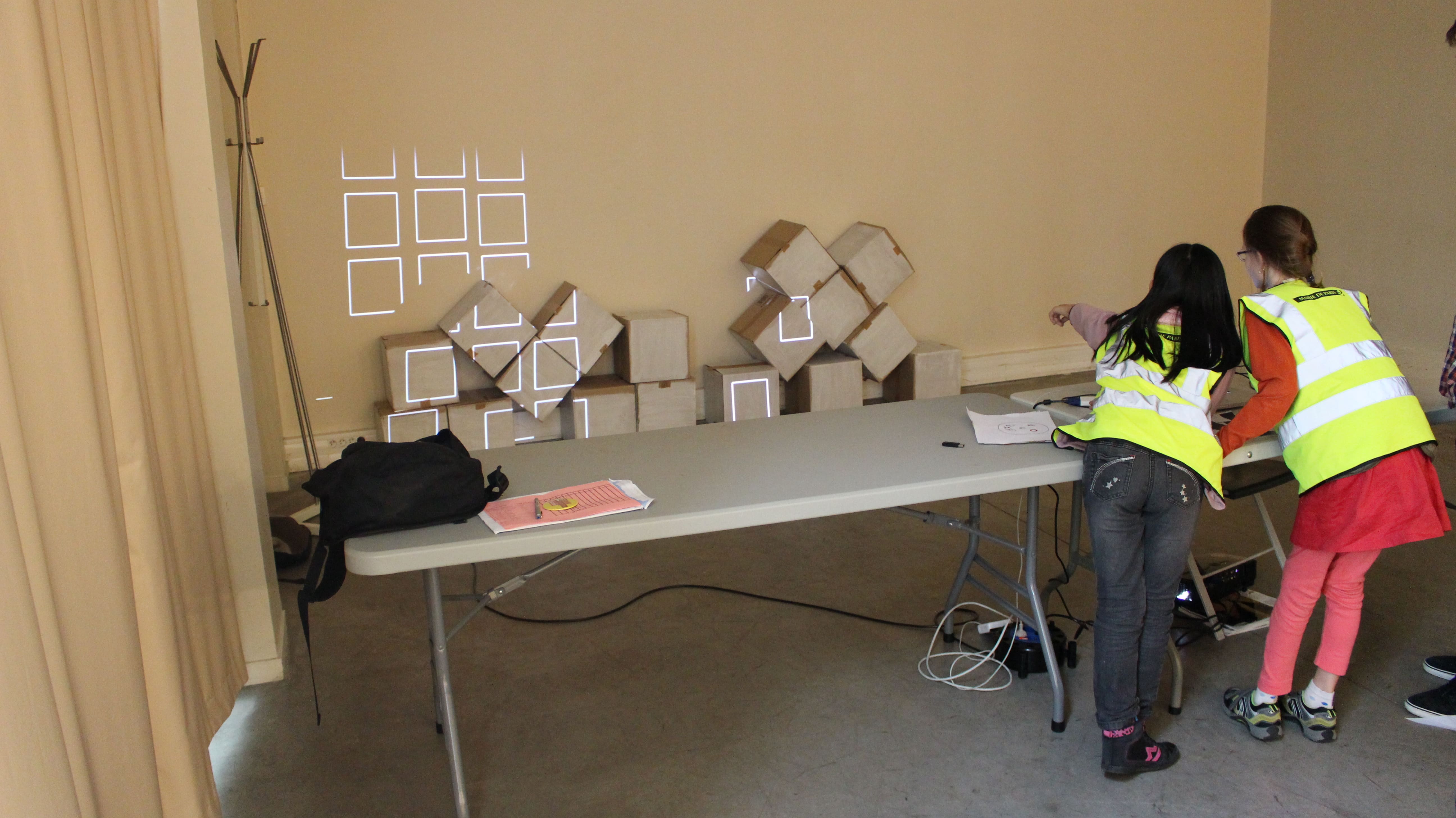 The second one, on the theme of the city and the Pedestrian Permit, raised students’ awareness of 3D issues. They had to create a miniature imaginary city. They built paper volumes, got the mockup fit and recorded several effects in the HeavyM software. A global and multidisciplinary experience widely appreciated, the video speaks for itself.

At Lycée Agricole d’Orthez, 30 students worked for 3 days on a video mapping project. Arnaud introduced the Olga kit to help each group to build its structure. The software discovery generated emulation, Arnaud even gave them extra keys with special effects and features. « I’ve never seen them get so involved, they don’t even take their break! », comments their professor, delighted. 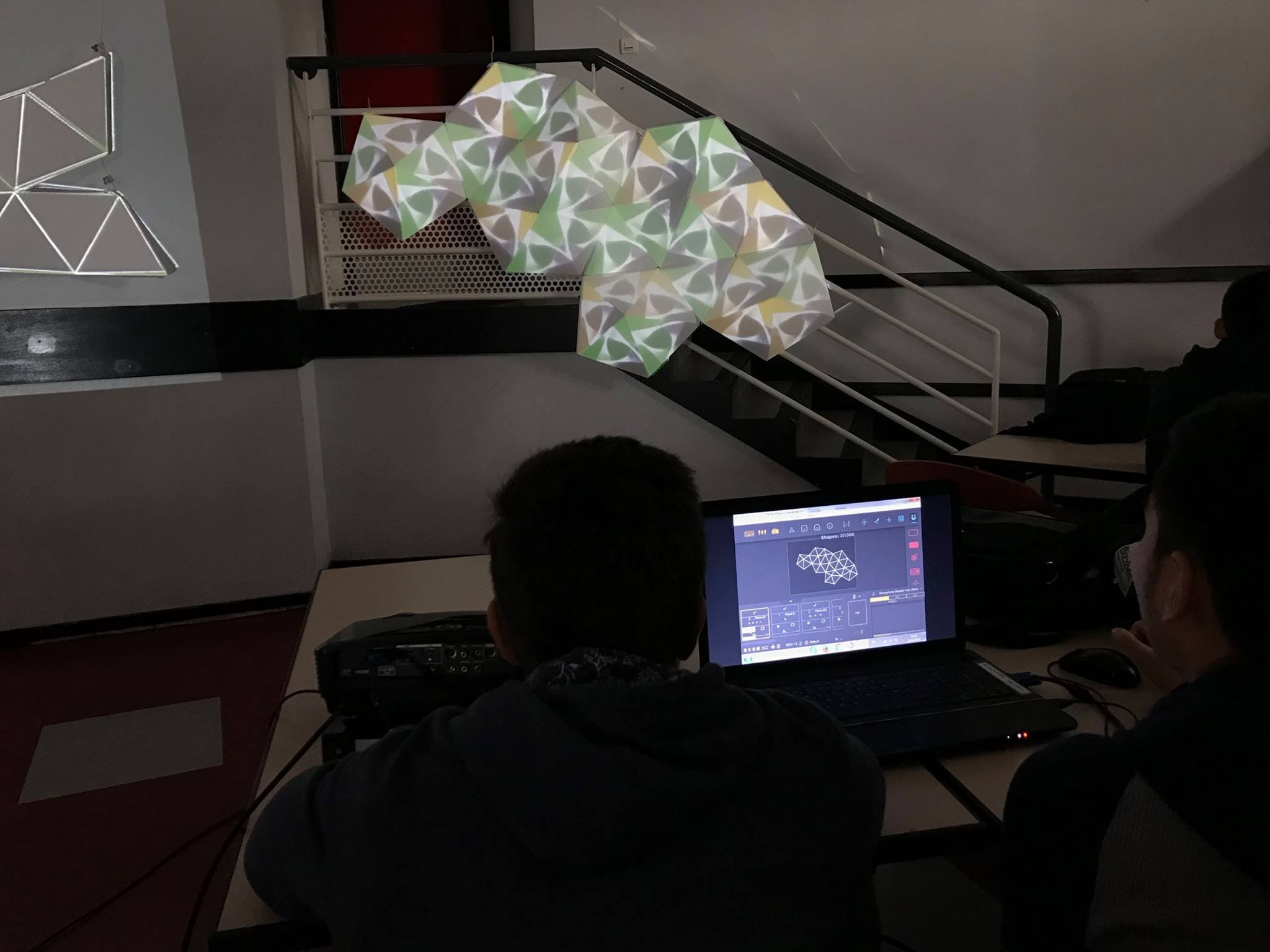 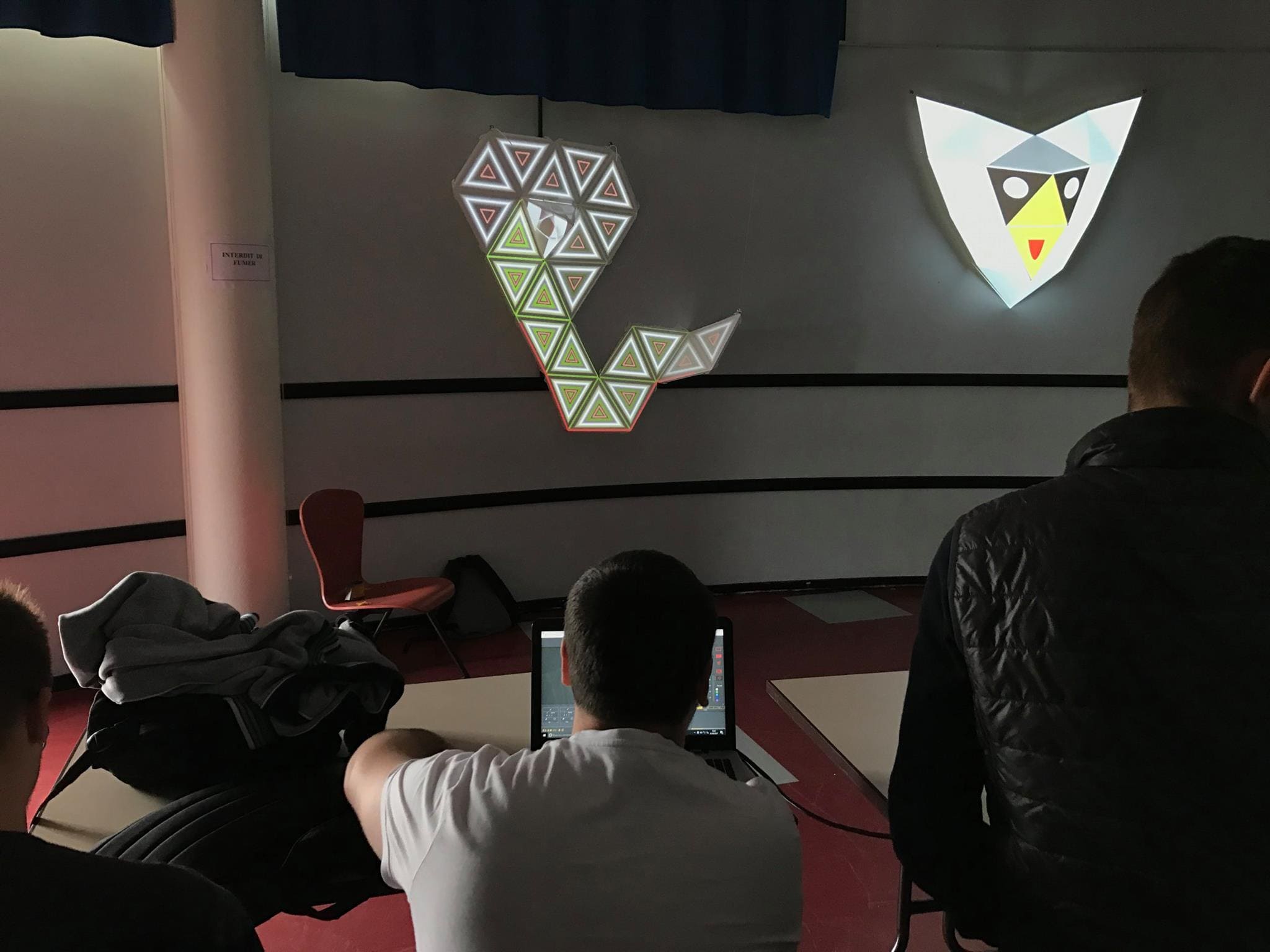 In March 2016, the first event of the e-smart Lab created by the engineering school ESME Sudria Paris, was an afternoon session on the HeavyM software, hosted by Arnaud and Etienne. The students were happy to associate technical knowledge and creative spirit! 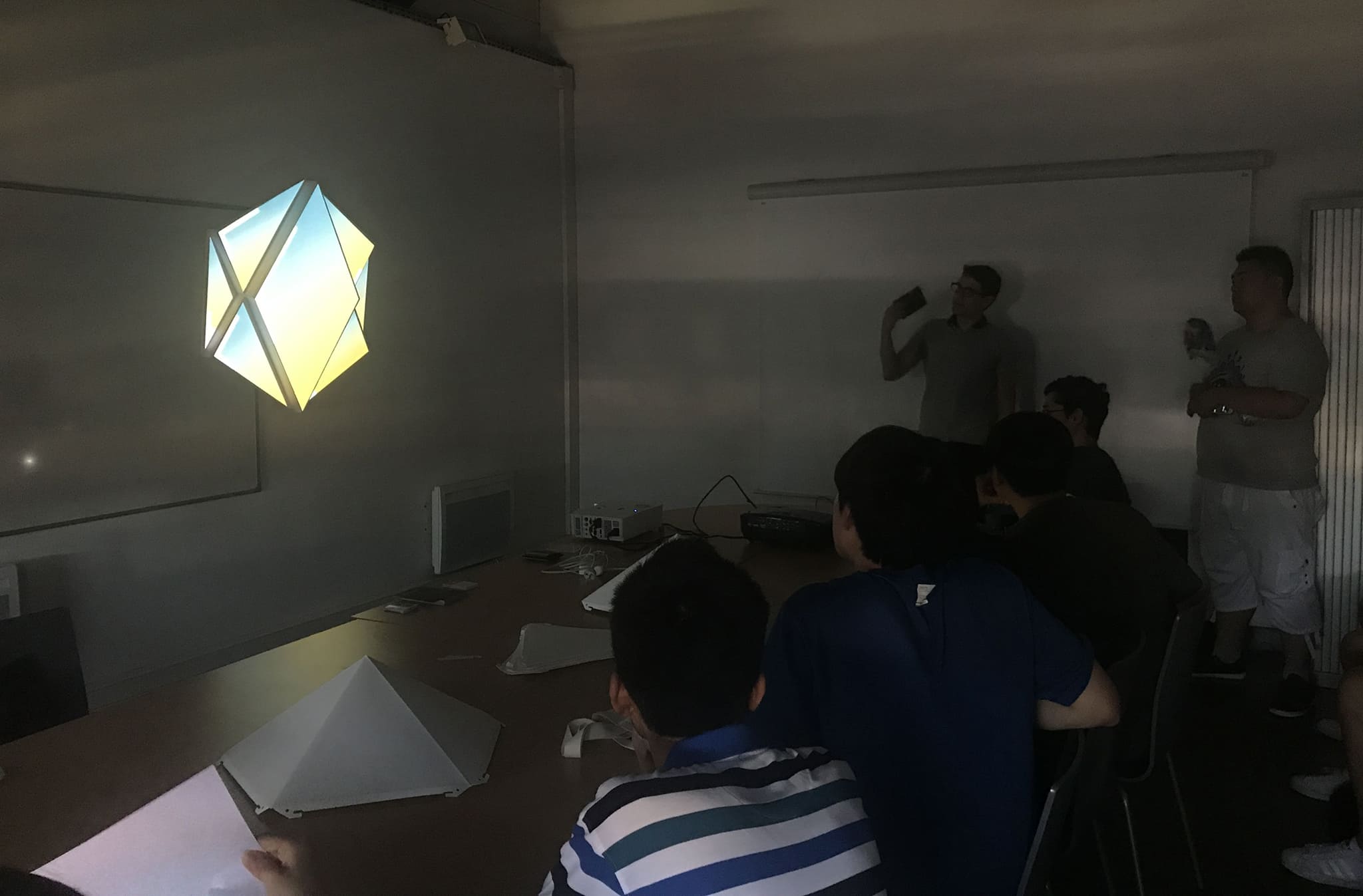 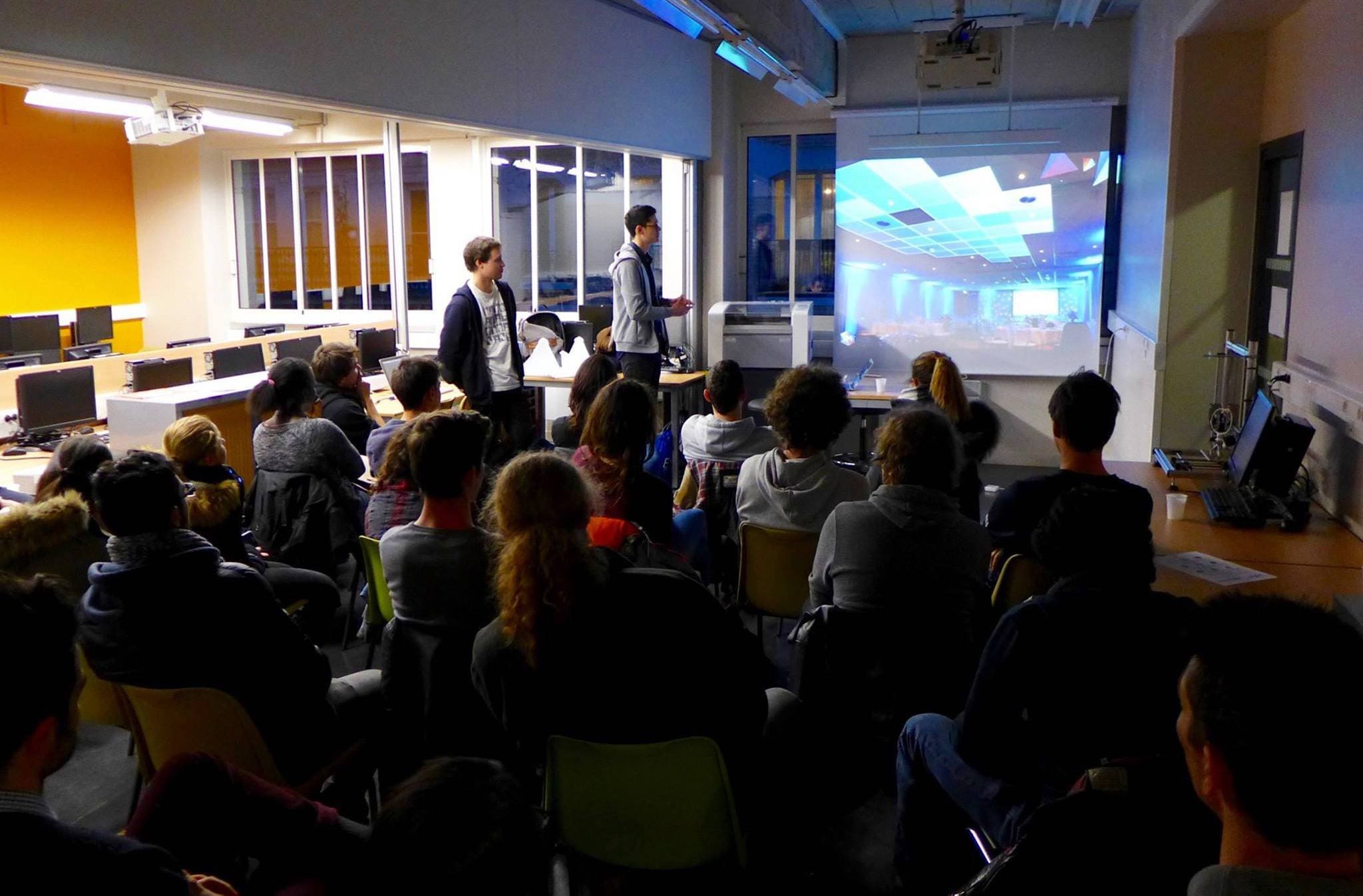 We well see video mapping turning into a medium of active participation, a platform to learn to live together; thanks to a collective call to inventiveness and a shared assimilation of technological aspects. Etienne, Arnaud and Romain, in a dynamic of exchanges and sharing, act as accompanists, mediators to give rise to freedom of movement and thought, and maybe – why not! – to reveal vocations. This coach activity, which appeared quite spontaneously in their schedule, suits them well. It matches with their desire to transmit their know-how and vision of a video mapping practice accessible to all.

The virtual image becomes a full-blown subject matter, to think, to modulate, to shape. In these few examples, we see the transversal and federative dimensions which are parts of the video mapping DNA. With the numerous effects and functionalities offered by HeavyM software, it could be the spearhead of new teaching programs, to expand new technical and creative skills, but also – and especially! – to awake human qualities in the project management and team spirit.

While these workshops act as effective teaching tools for young people and students, they also find a strong audience with an older, professional or hobbyist audience. Next month we will talk about workshops in cultural centers, events and those given by HeavyM ambassadors.

If you are a student, teacher or cultural association, you can enjoy 20% discount on our products