Meet the founders of HeavyM

Meet the founders of HeavyM

Etienne, Arnaud and Romain are the creators of HeavyM, a videomapping software which aims to make this projection technology more accessible. All three graduated from École Centrale d’Electronique (ECE) in Paris and met when they were still students. We take a look back at where it all began and discuss their vision and their community.

How was HeavyM born?

Etienne: We were all studying at ECE (Ecole Centrale d’Electronique) but actually didn’t know each other. I happen to be into electronic music and I wanted to work on a project that would be linked to performing arts and tech. Our degree included a project we had to work on as a team and we were free to decide on a topic. That’s how I ended up sending a post on our school’s intranet to search for teammates.

Arnaud: Etienne’s idea appealed to me immediately. I got in touch with him and joined the project very quickly. A little bit later, I talked to Romain about it–we’d both met during an exchange program in Canada.

Romain: It is true that, without this exchange programme, I might have never joined the project. When Arnaud told me about it, he and Etienne had already won the school’s prize (ECE Innov Award 2012). I wanted to work on something related to entertainment which would also be challenging, technically speaking: that’s exactly what HeavyM was offering me.

So it all started with an ad?

A: Haha yes, that’s one way to put it! We worked very hard after that. I still remember our school’s basement, where we had installed an office so we could focus on the project full-time. It didn’t even have windows!

E: And then, we all managed to do our final internship at HeavyM. It was funny how each member of the team was another member’s boss!

R: For me, the real push came from our crowdfunding campaign in June 2014. In just 48h, we had received support from hundreds of people, both in France and on the other side of the planet! 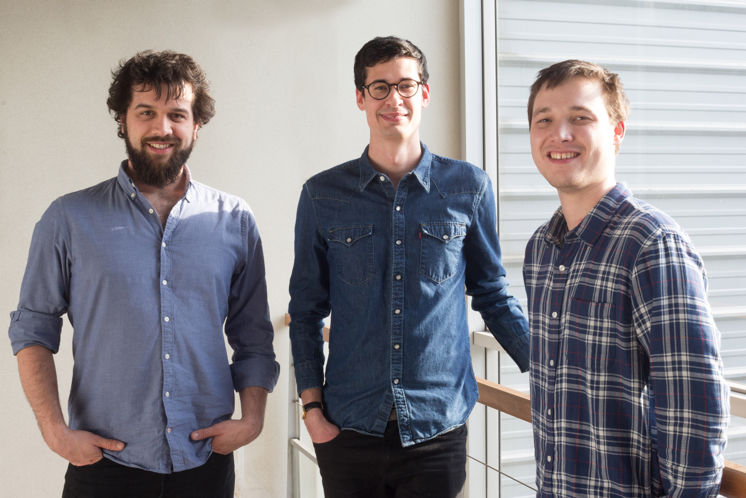 How would you explain the success of this campaign?

A: The software we’ve developed is quite pioneering. Back then, there was no software which allowed people to create mappings with such a extensive content catalogue and which was paired with audio analysis.

E: Our strength also comes from the fact that we have skills and personalities that complement one another. We all really wanted things to work out and our software to be useful and relevant, so we’ve also always really cared about user feedback. That was actually the main goal of our first Beta version.

R: I think the campaign was a success because we’re trying to make a difficult and impressive technology more accessible. The software’s features create emotions and are very appealing to the general public.

Did you develop some features depending on your users’ wishes and feedback?

E: Yes, that’s how HeavyM has been evolving until now: thanks to user feedback! They share their ideas and needs with us on a daily basis. Depending on what they are suggesting, we try to optimise each version of the software and to create new features. Our relationship with our users is crucial.

R: It is true that HeavyM’s strength comes from its community. One of our users told us recently that HeavyM was the most active community he’d ever seen. That means a lot!

A: And even if some users request features we cannot provide immediately, it pushes us forward.

Were you expecting to grow such a large community?

A: I think that in terms of quantity, yes: we were expecting to reach a large audience because the performing arts scene is really big. From the very start, a lot of VJs have become our ambassadors, and that has allowed us to make ourselves known.

E: What really surprised us was that we reached people in countries such as Kazakhstan, Russia or the United Arab Emirates. We had an international vision, but we didn’t think our community would spread that far this fast.

How do you feel watching this video after 4 years?

E: It’s impressive because the video really showcases the vision we already had back then. We didn’t just want to found a startup and promote it in a very commercial way. Instead, we wanted to bring an innovative product to the market which would foster creativity.

A: Haha! We spent hours covering these cardboard cubes with white paper… Actually, our idea was to create an orchestra with Blanche Stromboni, and each coloured cube was linked to an instrument. I think this video really helped us join the business incubator of the Centquatre because it really showcased the creative potential of our tool.

R: Seeing this makes me realise how much we’ve grown! Quite recently, some students in their final year at ECE asked us for tips to launch their own business. They had all heard of HeavyM and I remembered I was in their shoes not that long ago myself.

What is your vision for HeavyM in 10 years?

A: That’s a tough question as we don’t even know if computers will still exist in 10 years, but it is clear that we will still be part of the worlds of mapping and video projection.

R: Maybe mapping will look very different and we’ll be closer to the field of holograms, with a strong emphasis on relief. Augmented reality might also be an option.

E: As of today, our work is really about putting together our users’ requests with the members of our team who have the necessary skills to fulfill them. In 10 years, artificial intelligence and social platforms might be advanced enough to automate this step. In that case, we’ll be able to focus more on technical advances such as the ones that Romain just named.

You know everything about HeavyM creation, do not hesitate to contact the team and try the free version of the software.