HeavyM 1.7 is a major update that brings extraordinary new features that greatly increase the possibility of creation with the software. Some parts of the interface have been given a facelift for even more clarity.

Complete review of all the novelties included in the update

The first category of effect is now called “Outline”, which is composed of the effects “Border”, “Line” and “Repeat”.

Modes to sublimate your shapes

The “Border” effect evolves and now includes 3 new modes: Blink, Half and Quarter. These modes change the appearance of your borders and set them automatically in motion. 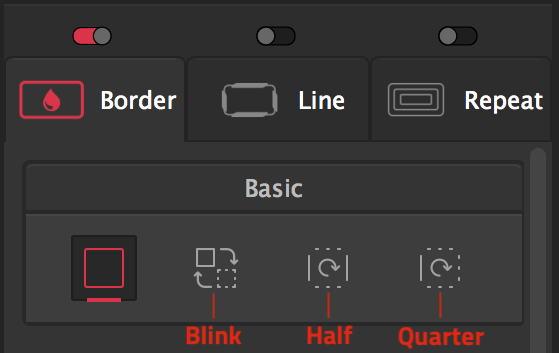 Blink: Alternate between turning on/off the borders of your shapes, giving the impression of a blinking.

Blink effect with modification of the speed

Half: Only shows the half of the edges of each of your shapes at the same time. Alternates between all the edges.

Quarter: Only shows 1/4 of the edges of each of your shapes at the same time. Alternates between all the edges, clockwise.

Quarter effect with modification of the speed

These two modes are really good alternatives to the Line “Classic” effect. 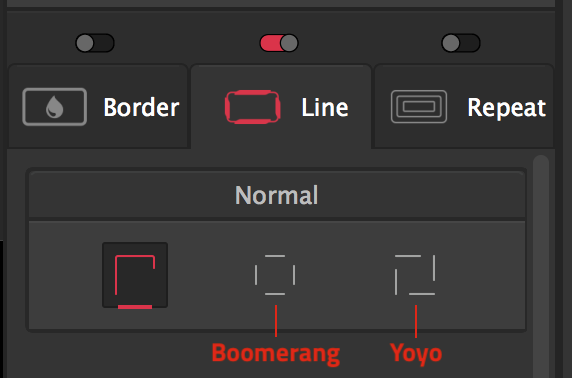 Boomerang: Displays an animated line on each edge of your shapes. Each line moves back and forth between the ends of the edge it’s on in a sort of bouncy motion.

“Boomerang” effect with modification of the lenght of the border

Yoyo: Displays an animated line on each edge of your shapes. Each line is tied to one end of the edge it’s on and extends until it reaches the other end, then retracts completely and so on. Kind of like a yoyo that goes down till the end of the thread, then comes back up.

“Yoyo” effect with modification of the “Offset” setting

An effect changes considerably by ONLY varying the “Phase Offset” setting.

“Gradient” moves for you!

It is now possible to set the “Gradient” effect in motion! The settings “Swing”, “Rotate” and “Blink” bring dynamism to the gradient and reveal a huge range of possibilities for your creations. 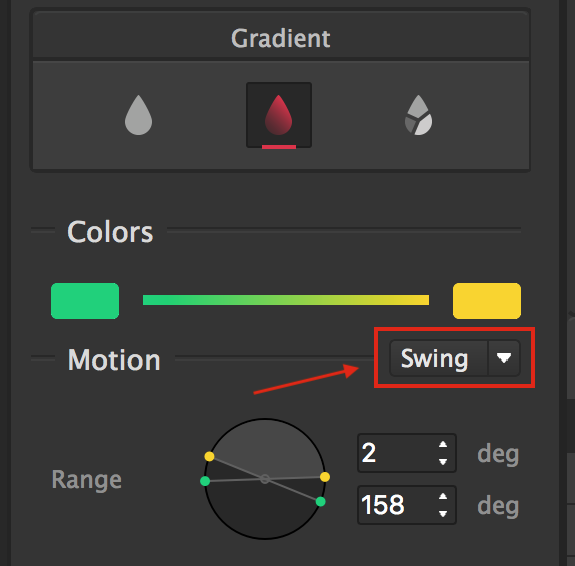 The yellow color do a round trip (at the top, “Swing” effect) or a full turn (at the bottom, “Rotate” effect)

In this latest version, you can now adjust the stripe width of the “Stripe” effect.

Increase/reduction of the width of the stripes

The “Instance” setting gives a serious blow to this effect. By increasing the “number” and shifting the “inner offset” you will get original animations. By playing on the “Offset phase” at the same time, the assemblies become almost infinite!

Increase of the number of instances of the “Elastic position”, “Elastic rotation” and “Elastic scale” effects.

“Radial Glow” effect with the increase of “Phase offset” setting

The new “Blinds” and “Falls” transitions create a real depth effect that will surprise your audience!

Introduced in HeavyM 1.7, the clip mode, as its name suggests, clips the visual effects that overflow out of your faces (it doesn’t apply to players, post shaders and transition effects). Obviously, the effects are always displayed within your shapes, but there can be an overflow due to the motion of some effects. For example, this can happen if you are using a custom center that is outside of your shapes, or with the rotation effect.

It’s now possible to control the play/pause/stop of your video with a MIDI controler or with OSC protocol. You can also change the value of the TAP tempo to change on the flow the global speed your animations

In HeavyM 1.7, we have introduced a new performance mode selection. It is intended to help you get the best out of HeavyM in terms of memory management, depending on the type of project you’re creating and the capacity of your graphics hardware.