Since 1905, the engineering school ESME SUDRIA has taken part in every technological innovations. Constantly looking ahead, the educational council had to notice video mapping! In 2017/18, for the very first time, several students had the chance to work with HeavyM software, included in the preparatory classes program. 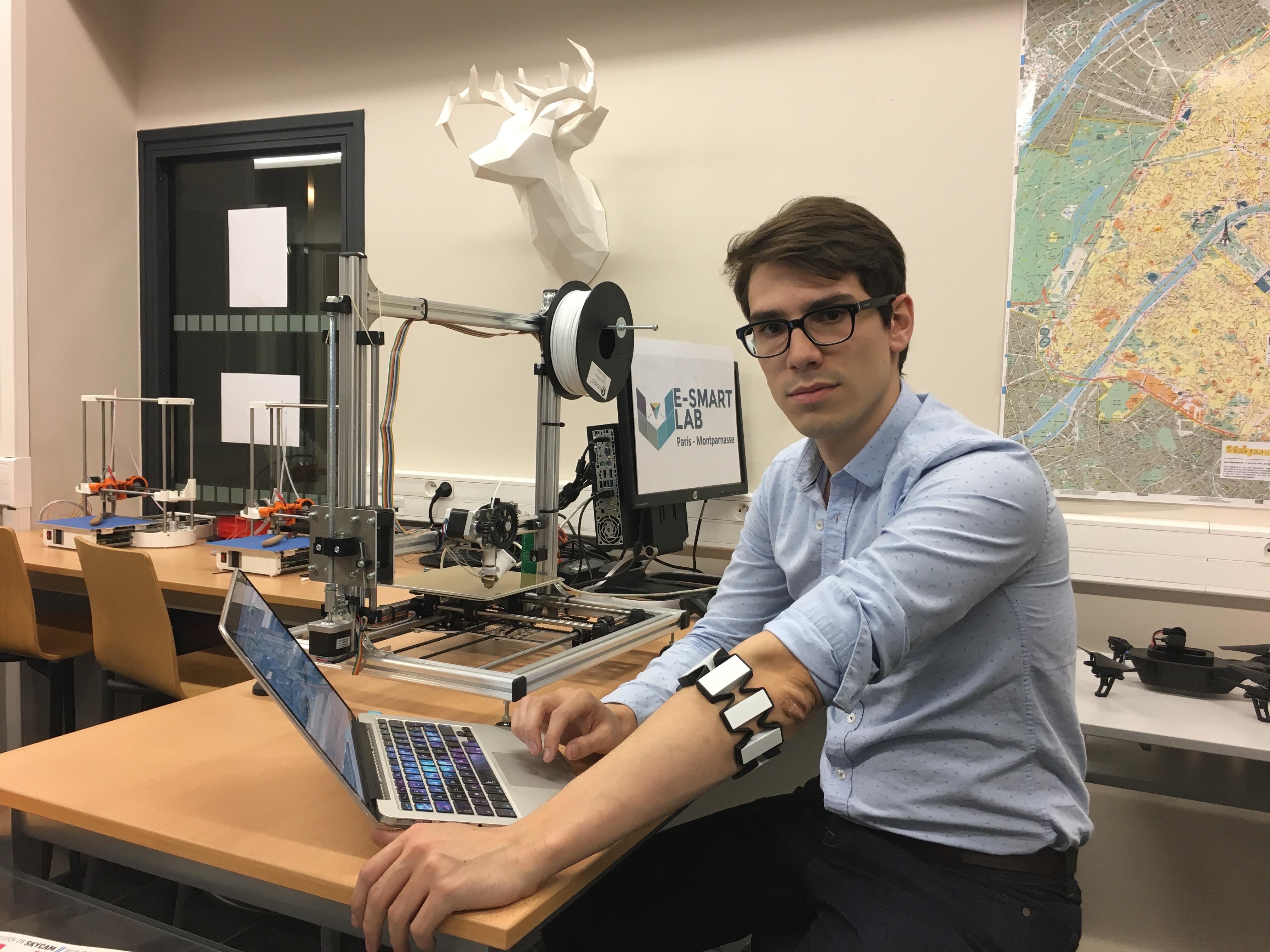 Romain Astouric at the e-Smart Lab of ESME SUDRIA school

Romain Astouric discovered HeavyM on Kickstarter in 2015. Interested by the project, he contributed to the campaign to get the first version of the software. He has followed all the evolutions of HeavyM and considers it’s the first video mapping software to be as fast, practical, fun and creative. “With HeavyM, you don’t need dozens of workshops hours to start having fun!” Romain introduced HeavyM once, in 2016 (see the article Sur le chemin de l’école), and took the opportunity this year to integrate the software into the school curriculum.

For this teacher, HeavyM added value is obvious: the tool is simple and stimulating because results can be quickly obtained. It can also be easily combined with other tools, sensors and external software via MIDI and OSC protocols. Moreover, the video mapping leads to a large-scale creation which takes a real place and sets an immersive universe up. Finally, in a pedagogical purpose, HeavyM works according to a numerical calculation directly measurable in reality. Projected on a volume the work is concrete, sensitive, interactive and… aesthetic! 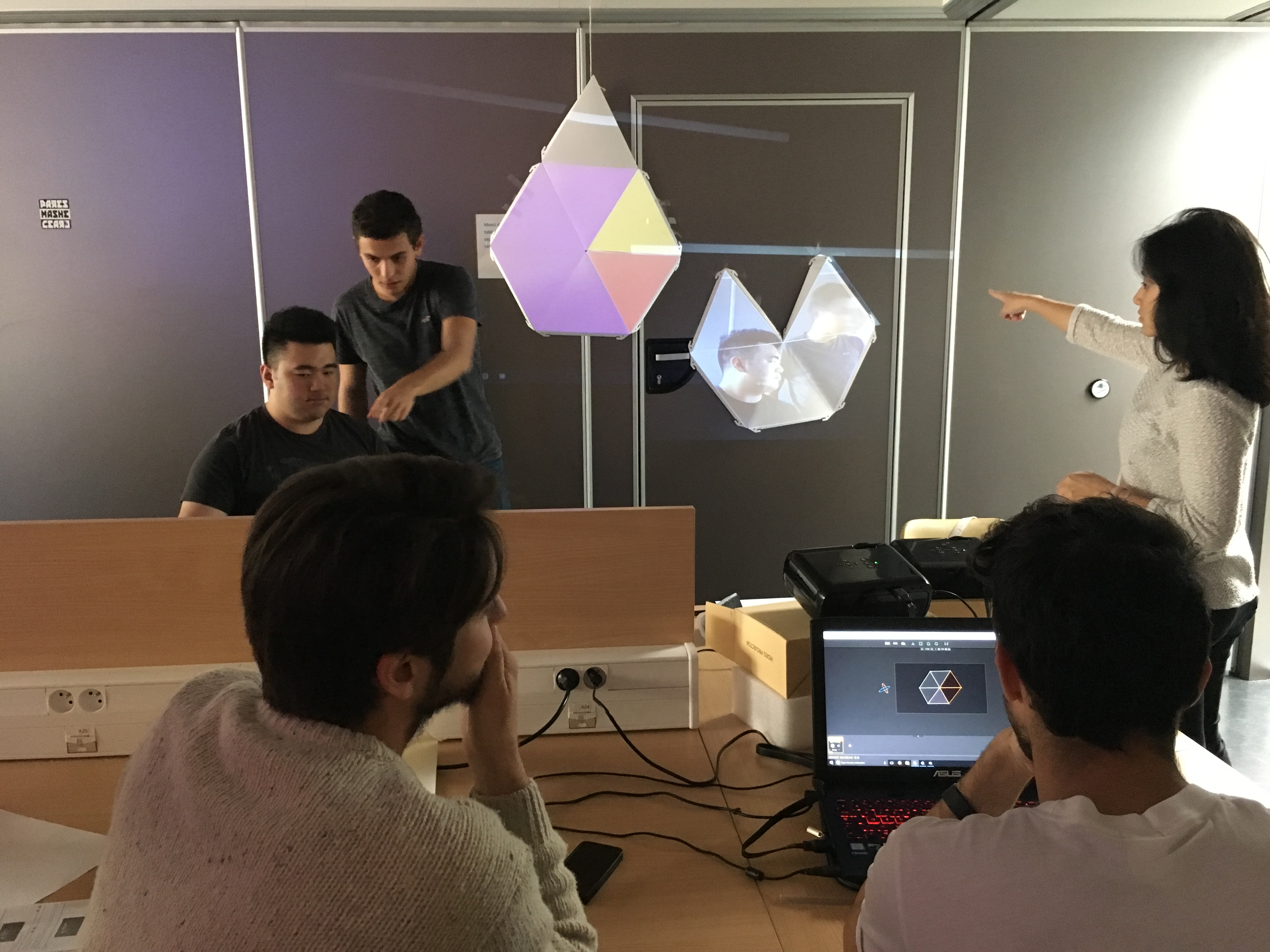 Students are testing and experimenting their ideas

This program gives to students a « carte blanche » to put into practice their lessons in electronics, algorithmic and applied mathematics. The opportunity for these 18-19 years old is to discover themselves, to boost their curiosity, openness and artistic fiber, to unlock their potential blocks, in order to go beyond theory and to apply their knowledge to concrete projects. The group dynamic is also important : everyone must find a suitable place and take responsibility. 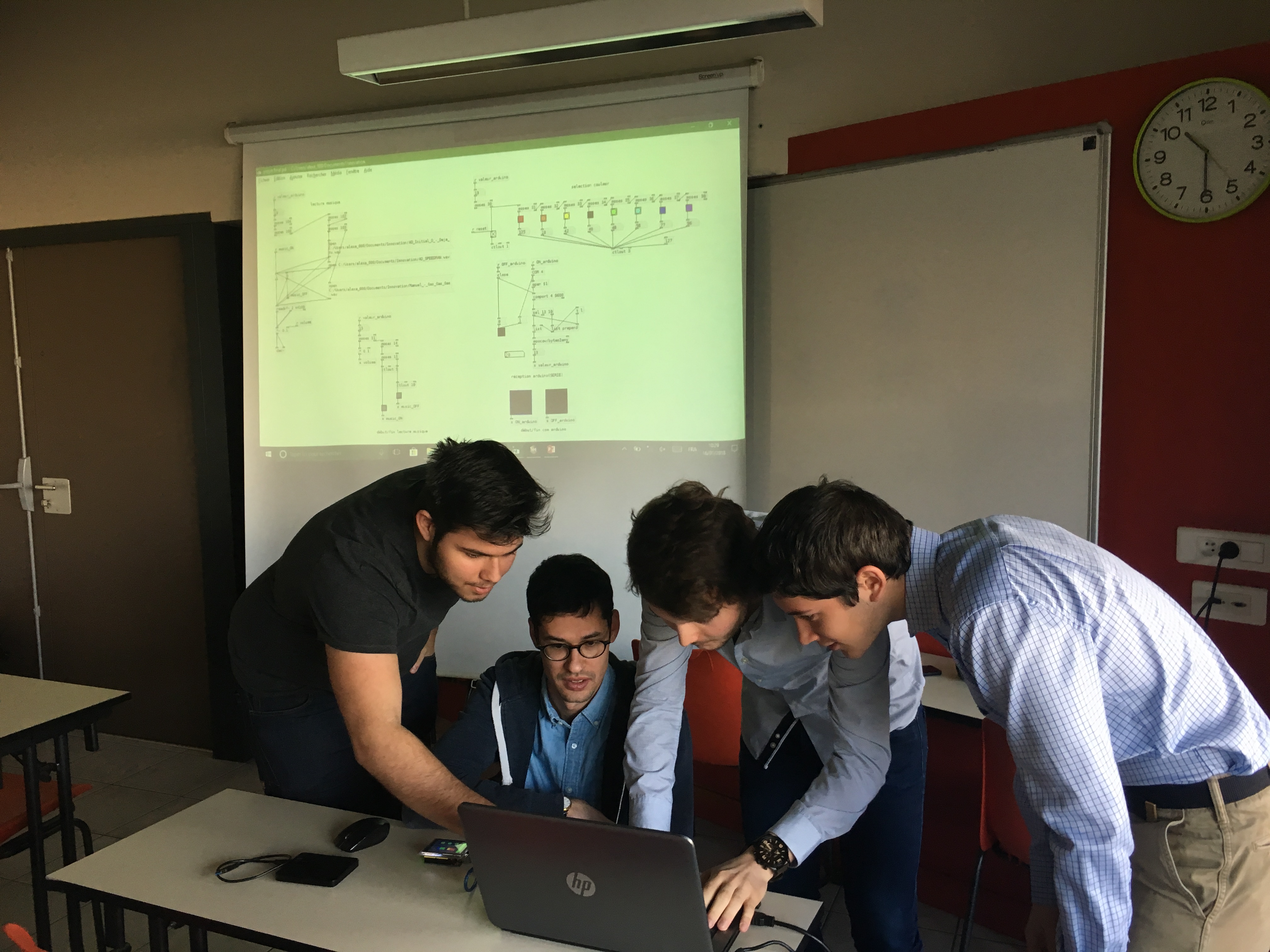 End of September 2017, 20% of students chose the theme “creative programming and digital art” and 5 out of 9 groups decided to use HeavyM. Some students, already familiar with video mapping, were enthusiastic about working with HeavyM. 1/2 day per week for one semester is planned, from October to January (10 sessions of 3 hours) to conceive a project to be prototyped in e-Smart Lab, the ESME SUDRIA collaborative digital workshop of which Romain is the manager.

To learn more about the tools that can be used. In four sessions, the students discovered Processing (graphic programming tool), Pure Data (interactive programming tool), HeavyM (video mapping software) and Arduino (electronic prototyping platform). This mediums’ plurality invites to multi-tasking and transversality between electronics and visual.

At the 5th session, the watchword is given by Romain: ” It’s your move! “. Time now for each group to test and combine the tools, to offer their project the best coherence and efficiency. Romain advised and guided them, throughout their evolution, without however giving them the solutions! When some of them set difficult challenges, Romain gave them tips to achieve their goals more easily.

The orals in January 2018, divided into 3 parts: 10 minutes for presentation, 5 minutes for prototype demonstration and 5 minutes for discussion. Some works appeared to be so sophisticated that students wishing to go further will have the chance to continue their projects next semester.

The jury had a very positive assessment, with really interesting results. Beyond the technical mastery demonstrated by the students, the program has unveiled promising ideas and prototypes that deserve to grow. For example:

This project presents an alternative to the computer mouse for video mapping animations: once the drawing of « Initial D » car (inspired by the world of Manga), realized and the visual effects set in the software, a small touch screen has been connected and programmed on Arduino to simply and simultaneously trigger the loaded music and the visual effects programmed in HeavyM. A real technical challenge for these students who started from scratch and created a new interactive tool. 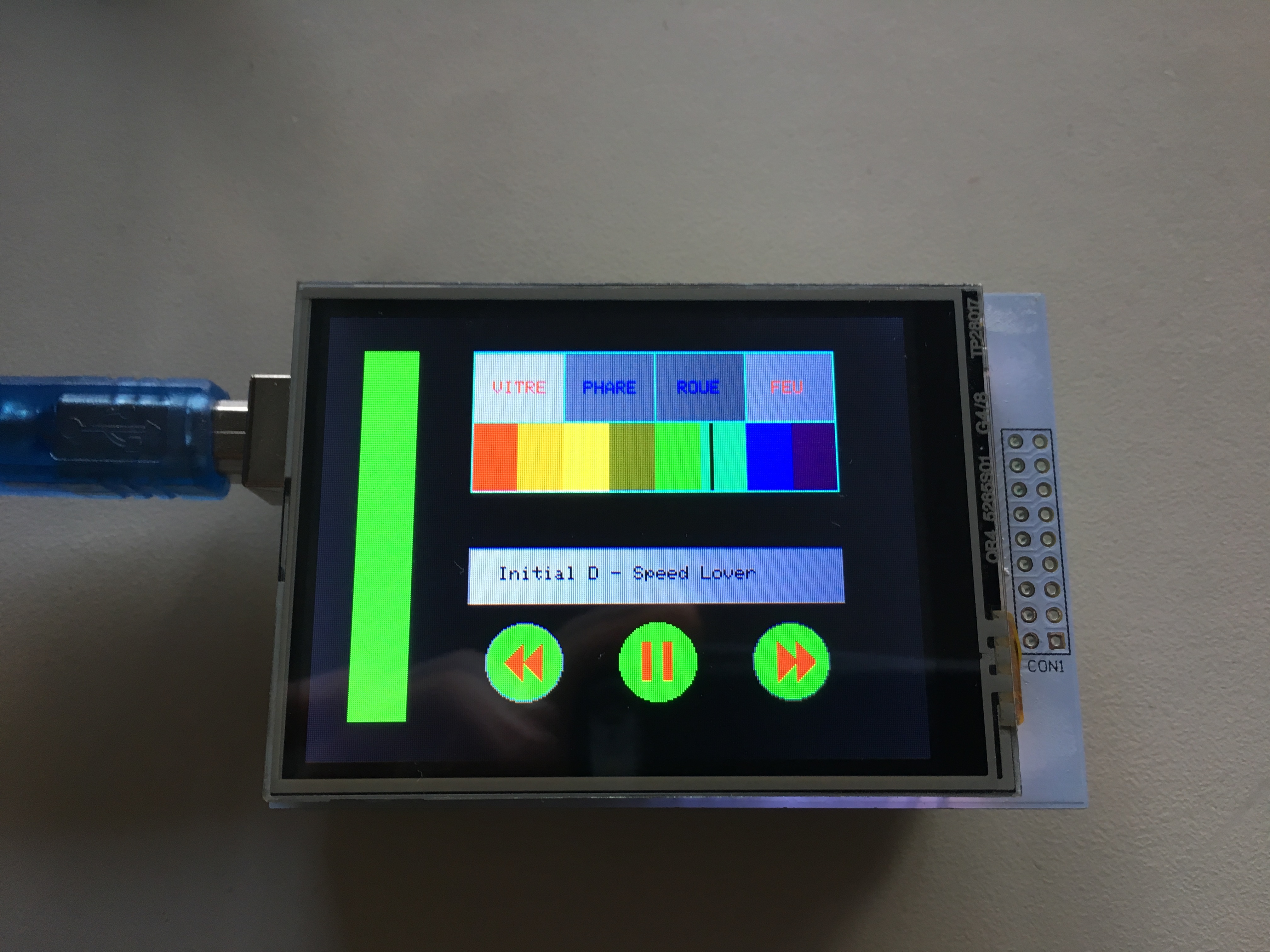 The touchscreen mounted on an Arduino 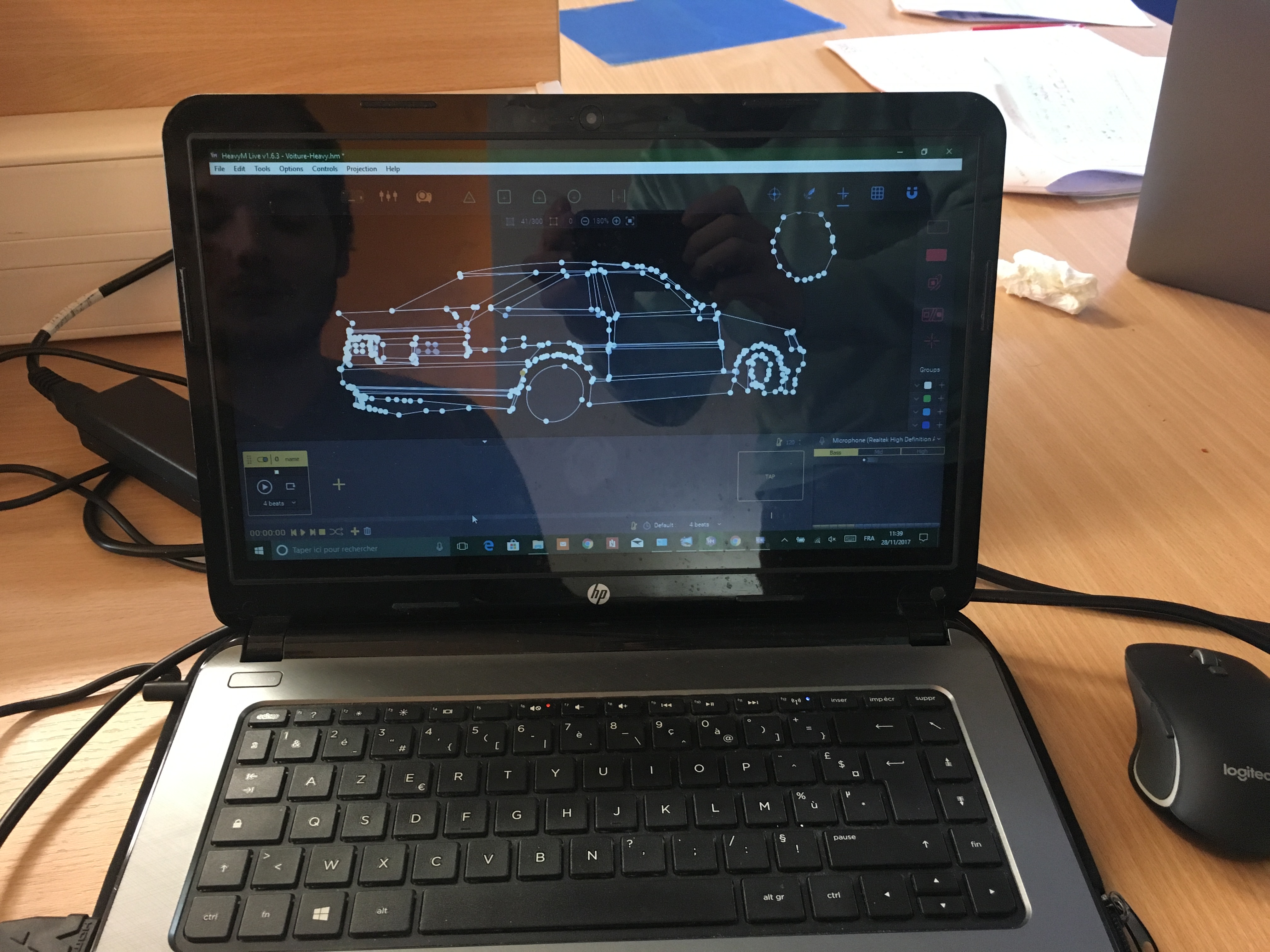 The shapes to create the car into HeavyM

The colors of the car are changing thanks to the touchscreen

This project consists of an interactive world map with continent-shaped wood pieces, placed on a plexiglas plate and recorded, displaying the requested continent on a wall, thanks to a bar code and a video mapping. An educational and playful tool combining material and immaterial dimensions. 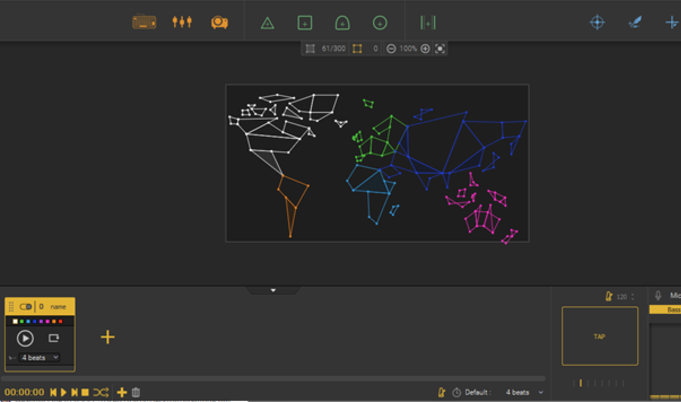 The divisions of the continents with the “groups” features 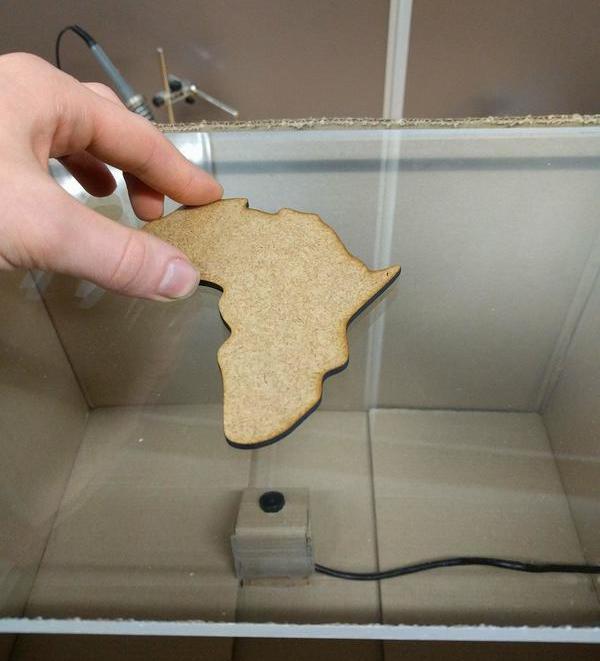 The goal of this project was to control two programs (HeavyM for visual effects and Ableton for sound generator) with a single controller. An accurate coding work has been provided using Max MSP software to synchronize image and sound, for new interactive scenes. 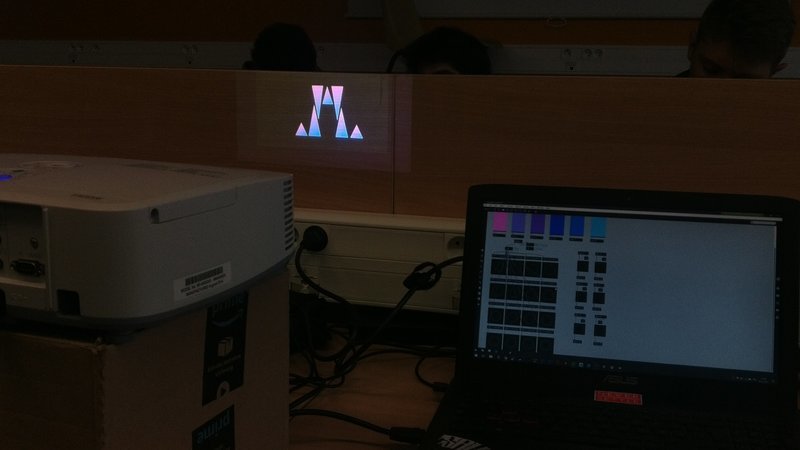 This first successful edition surely launches other similar programs in the future!

We would like to conclude this article with Romain Astouric’s personal project: Audio, Video, Disto, an interactive musical and visual installation to create your own scenography, between DJing and Mapping, like an audiovisual jukebox. Romain used HeavyM Live for his project and greets the new HeavyM 1.7 because he can now control the tempo, automatically synchronized on the played songs.

Students, teachers and members of an educational organization benefit from -20% on all our products

Keep informed of news and events

Keep informed of news and events